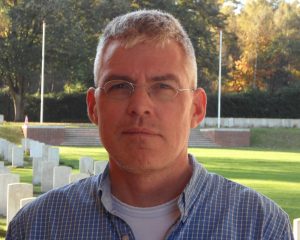 Darrell lives in the Netherlands, not far from the battlefields of the First World War. He grew up throughout Canada, but spent most of his youth in the shadow of the Rocky Mountains in Calgary, Alberta where he studied Political Science & Economics, and thought briefly of joining the Navy. Instead, he moved to the Netherlands to complete an MBA. After a first career in the European equity markets he embarked upon a new one in writing fiction. His debut novel, Malcolm MacPhail’s Great War, was published in 2017. This was followed by My Hundred Days of War in 2018, A War for King and Empire and Vicissitudes of War in 2020, and A Summer for War in 2021

The idea for a novel about the Great War slowly came to life as the centennials began, coinciding with a trip to Ypres, Belgium.

Darrell’s first novel, Malcolm MacPhail’s Great War, introduced the world to Malcolm MacPhail, a young Canadian soldier whose penchant for plain-speaking proves almost as hazardous as the momentous battles of the Great War in which he finds himself. Through his eyes we experience the “war to end all wars”, beginning in late 1917. With Darrell’s second book, My Hundred Days of War, the story continues into the fall of 1918 and the hard-fought final battles of the war. A War for King and Empire takes a step back to 1915 (this makes it the first book chronologically in the series) with MacPhail arriving for the first time on the Western Front. Vicissitudes of War takes up the story of him going into action at the Somme in 1916, and later at Vimy Ridge in early 1917. In A Summer for War the action takes place during the 1917 Battles for Arras and Hill 70.

A rare image of Malcolm somewhere on the Western Front.*

Malcolm MacPhail is an unlikely soldier. Yet that’s what he’s become.

Wry, irreverent and no great fan of the army hierarchy, he’s not shy about letting his views be known. Particularly when he sees things differently, which he does all too frequently. As a fledging lawyer that might have been fine in a courtroom, but it’s an attitude that doesn’t sit well with his more traditionally-minded superiors.

When the war breaks out Malcolm is living in a far-flung corner of the British Empire, the Canadian city of Calgary. Swayed by the Empire’s heady call to battle and the lure of adventure overseas, he signs up – an ill-considered escape from brewing troubles at home and anguish about his young wife’s recent death. However, war on the Western Front is far from a glorious adventure.

Fortunately he’s learned how to handle a rifle well enough, even if it’s still a struggle not to tremble when the shells start to fall. A few stiff drinks and an occasional good meal away from it all are precisely the sort of relief he welcomes. However, as he’s quick to point out, he sees little of either in the trenches. And what he does see doesn’t much please him. Still, his fellow soldiers seem to respect him, valuing his deeds and bemused by his quirks and sardonic humour.

Malcolm may not be a born soldier but he’s learning the trade the hard way. Not that there’s much of a choice, the war is grinding on. Whatever doubts he has, he’ll do his duty with his trademark determination and resourcefulness. Although it may just come down to luck. As Malcolm says, “luck is a fine thing to have”. On and off Europe’s blood-torn battlefields he’ll need every ounce he can find.

* Acknowledgement: “Canadian armoured cars going into action at the Battle of Amiens” Library and Archives Canada Ministry of the Overseas Military Forces of Canada fonds/a003016